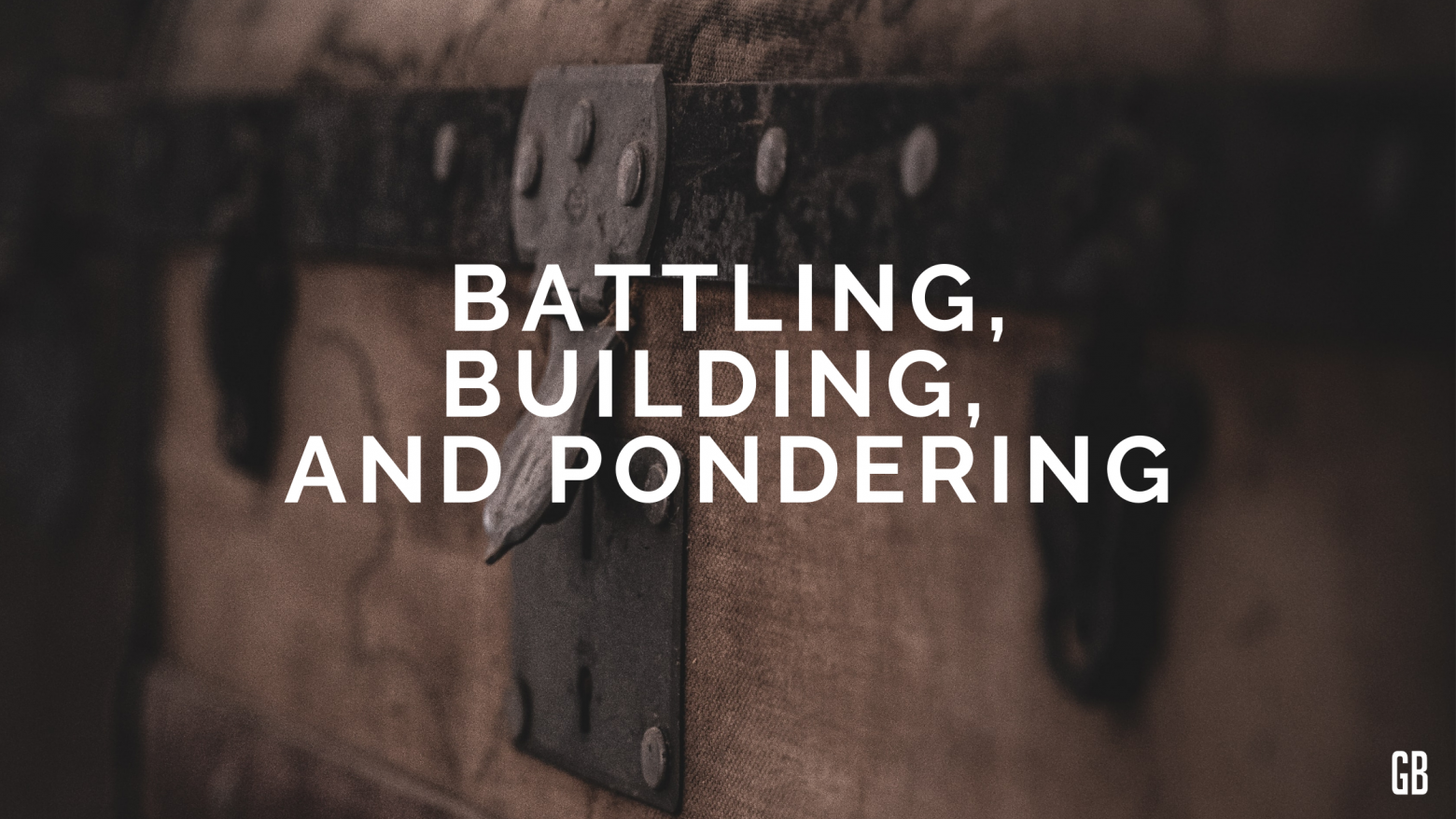 Could you recall ten prophetic words over your life, right now, without finding them somewhere?

I can honestly say that I could because I have spent time going over the words I’ve received on a semi-regular basis. That’s not meant to be a self-pat on the back, but I can say that I have put reasonable effort into valuing the words that I’ve received.

Does it matter that we store these things in our hearts? That we can recall them quickly in times of crisis? That we can have at least a basic sense of certainty that what we’re building is actually worth our time investment?

I would propose that it matters significantly more than we think.

I want to make it abundantly clear with what I’m about to say that none of the prophecies over your life hold the same weight as the prophecies in Scripture. Of course, you wouldn’t think I’d have to say that, but you’d be surprised how easily you can be accused of that suggestion.

With that in mind, consider Jesus in John 5:32: “There is another who testifies of Me, and I know that the testimony which He gives about Me is true.”

Jesus was absolutely convinced that what the Father said about Him was true. Because of that fact, Jesus could speak authoritatively about what He came to do. There was a confidence, an unshakable boldness He displayed when He set out to do the Father’s work.

Once again, our personal prophecies are not on the level of what scripture says of the Messiah, but the underlying principle remains.

Many of us are on shaky ground, unsure if we’re on the right path because we don’t have the first clue what He’s declared over us. It leaves us vulnerable, not knowing how to fight, not knowing where to invest time in building, and not knowing what we truly value.

I can tell you that there are at least three incredibly valuable things we can do with the words spoken over our lives: We can use them to fight, use them to build, and treasure and ponder them in our hearts.

“18This command I entrust to you, Timothy, my son, in accordance with the prophecies previously made concerning you, that by them you fight the good fight, 19keeping faith and a good conscience, which some have rejected and suffered shipwreck in regard to their faith.”

The prophecies spoken over your life are weapons! Paul says of the prophetic words given to Timothy that “by them, you fight the good fight.”

Paul knew the battle Timothy was up against as a young pastor, and as a good mentor, he tells Timothy one of the keys to winning the fight. By waging war using the words spoken over him, Timothy could keep his faith and a good conscience even when it felt like the enemy was having a field day with the beliefs of those God called him to lead.

As a good general of the faith, Paul was reminding Timothy where He would truly win the war. After all, “For though we walk in the flesh, we do not war after the flesh.” (2 Co 10:3) Though Paul imparted natural wisdom to guide Timothy as he navigated these waters, he knew the battle would get personal at some point. In these moments, Timothy had to be sure of what God said about him through prophecy, well trained in wielding the words like a sword. Anyone who uses a sword must train to use it well until wielding it becomes like an extension of the person. If swinging and using that sword isn’t second nature in times of crisis, the soldier is vulnerable when the battle gets personal.

Ephesians 6:17 says to take up the “sword (machaira) of the Spirit, which is the word (rhema) of God.”

A machaira is a sword for up-close combat when the enemy is directly before you. The rhema word of God is that which proceeds from the mouth of God. When the battle gets personal, I want to be so well-trained in the Word and the words spoken over me that fighting effectively is second nature.

“And the elders of the Jews were successful in building through the prophesying of Haggai the prophet and Zechariah the son of Iddo.”

This reference refers back to the people of God, who, upon their return from their exile in Babylon, were on a mission to rebuild the house of God. Due to the accusation of the enemy, the work on the temple paused for 18 years after their return home. Though there were plans and strategies and people physically assigned to carry out the work, the Scripture attributes the success of the temple being built to the prophets. When nothing was moving, the prophets were moved by God to speak, and the people moved in accordance with the words. It was the prophetic that made it happen.

Through the prophetic, the people built. The words empowered and encouraged the people to be faithful to their mission. If we’re going to build something of value, I can only imagine it would be the same with us.

When I was 18, I received a prophetic word saying that “I would have a flock from a young age.” I started a prayer ministry in my school during that time, an incredibly impactful time for many people. I began “pastoring” a group of people before I even knew what I was doing. It was because of that word and other words in that season I was confident in what I was building. I had a boldness and a resolve that I’d never had before. I prayed like never before. I built something of worth that I would have never built without the prophetic words spoken over me.

It was the same with the church Tabby and I planted when I was 23. The “flock from a young age” rang true again, and multiple words about the church God called us to create led to some of the most fulfilling ministry of my life. It was not a perfect church by any stretch, but we built something that had an impact on people in a profound way. Had it not been for the words, we would have never had the courage to build.

When times of frustration or crisis came, I didn’t stay discouraged long when I went back to the words. It reminded me of what I was building.

I’m a firm subscriber to the idea that “unless the Lord builds the house, the builders labor in vain.” (Ps. 127)

How can I be sure that what I’m building is not in vain unless I have a word? It is by the word that I build. I’m not looking to build whatever I want and ask God to bless it. I look for what He’s spoken to me and build accordingly. Your words show you where to build.

Pondering and treasuring the words over your life, chewing on them, and going over them will help to shape you into what the word is birthing. Anybody can get a prophetic word and be amazed. I can say “wow!” when a huge word is spoken over my life and never think more of it.

It doesn’t take much to say “wow,” but it takes intentionality and focus to ponder. Pondering is a choice. It is an intentional, aggressive approach to a word.  Mary received a word about her Son, you may have heard of Him (Jesus), and everybody was amazed to hear it. Everybody said, “WOW!”

Yet the Scripture records a distinction in how Mary received the word, with one of the bigger “buts” in the Bible:

“16 So they hurried off and found Mary and Joseph, and the baby, who was lying in the manger. 17 When they had seen him, they spread the word concerning what had been told them about this child, 18 and all who heard it were amazed at what the shepherds said to them. 19 But Mary treasured up all these things and pondered them in her heart. (emphasis mine)”

Mary pondered what had been said about her Son until the day it came true. She held on to the promise that God had given her and didn’t let it go. For years and years, she went over the promise until it was fulfilled, having the distinction and privilege of being called the Savior’s mother.

I am not saying that if you just ponder enough, that’s how you get prophetic words to come true. The grace to complete itself is already in the word if it’s from Him.

Mary pondered and treasured these words in her heart. She protected them, had an inner dialogue with them, and believed them faithfully. The words took years to come to pass, but you can bet the process of treasuring and rehearsing those words shaped her until she finally saw them manifest.

You can “do” nothing with some words you receive but simply believe them. Some words are meant to stay hidden in your heart, valued even if you see no fruit for decades. That process of continual value and belief in His words will shape you for some of your greatest breakthroughs.

Whether battling, building, or pondering, I believe it boils down to intentionality. Will we intentionally value what He’s said over us enough to create a space for it to come to pass?

How can we see signs of a word coming to pass if the word is long forgotten?

Value His words over you. You’ll be amazed at what they can do when they come from His mouth.